Home cooked: anyone can try their hand at becoming a mini takeaway service

All these businesses have identified consumers’ desire, on the one hand, for flexibility and convenience, and on the other, for an alternative to the traditional supply chain.

They combine flexibility and convenience with tech savviness: the Uberification of food, if you will.

DishNextDoor is a web-based start-up, covering some but not all of Hackney’s postcodes, that connects neighbours’ kitchens, so that amateur chefs, matriarchs, bakers and anyone else can try their hand at becoming a mini takeaway service for their community.

It provides home cooks with an ordering and payment platform (their website), free hygiene training, certification and insurance, as well as food packaging and a courier service.

The company presumably takes a commission to cover operational costs. 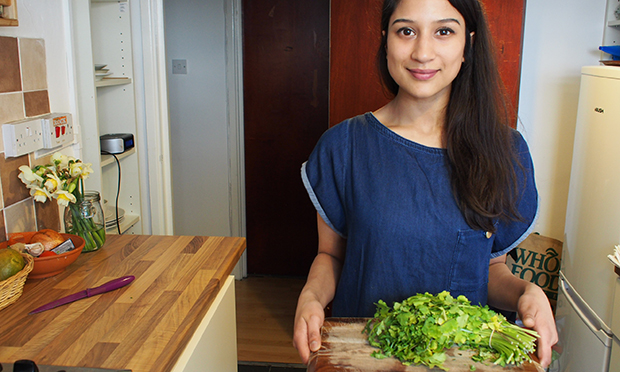 Each chef has a bio and picture, and the website is a showcase of Hackney’s multiculturalism.

Although the gender remained predominately female, there were many older people, and different nationalities and faiths, so felt like an avenue for interaction with people one might not naturally get to talk to on the street or in the shop.

User reviews were universally positive, making me suspect that community, not food, was the primary driver of sales. I can’t imagine that selling four portions of lasagne is a great earner, either.

The service has its kinks. I was enthusiastic about both ordering and cooking food for this article, before realising there was no delivery to my postcode in Hackney Wick.

Ordering from a friend’s house in Clapton, we found Clapton was not well covered either. Most dishes had sold out by 4pm.

Chicken tonight: chefs include hand-written notes in their deliveries

With three of us dining, and only five available cooks, we had few options, and not enough food from one cook to cover us all, so also three deliveries.

Our staggered meal consisted of a lamb kebab split three ways, a vegan paella and a haddock cream pasta.

The food was no better or worse than an average, home cooked, weekday meal.

I’ve seen a few similar services for Hackney and London, so it seems the market has yet to consolidate. But when it does, there should be enough cooks and variety that these issues will work themselves out.

User reviews might be more reliable, meaning one might be able to source excellent food. I hope DishNextDoor or a similar venture thrives locally – it may be a modern iteration, but at its core this is all about peeking into the houses we pass every day, and breaking bread with our neighbours.

Update, 7 July, 18.50: This article was first published in print on 1 July. We have since been informed that DishNextDoor is to close down and stop all trading.